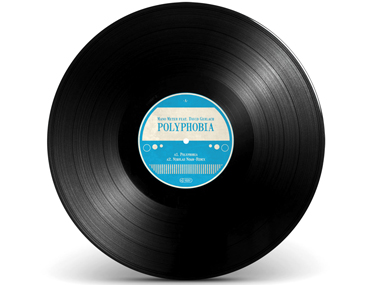 Using the success of his album "Swinger" as a door opener in America, Mano Meter has also grooved straight into the hearts of Artist's like Parov Stelar, Simina Grigoriu - Paul Kalkbrenners wife and Alle Farben.

It was only a matter of time, to present his latest work from the studio. Together with David Gerlach, who's kind of an wunderkind on the Piano, he has produced a song called "Polyphobia". You'll find a pearly, extremely fresh Groove which has already influenced dancefloors from Europe all the way to Burning Man!

He finally had mercy with the ordinary music lovers and released this well kept secret to the public on Vinyl and Digital! It has been enhanced with Remixes from Der Schmeisser & Der Tietz, Das Fachpersonal and Nikolas Noam.

Being fascinated from each others work, they finally made it happen to meet in person: Two People being in love with music for almost all of their lives. Once they have started to combine their Groove and Harmony Skills, they have never really stopped. They'll always find a gap to work on upcoming live-sets or to play Marathon DJ-Sets.

After starting his DJ-Career in Kassel at the famous Club "Aufschwung Ost" in 1996, "Der Schmeisser" became a resident in the Club A.R.M. in 2000. It's always been more then just a club - more like home. During all this time he was not only DJ'ing but also produced more than 50 Vinyls on several great Labels like "Kill the DJ" (Frankreich), "Fabric" (London) or "Incorect Music" (Detroit). One of his last Releases is the Decks.de Number-One-Hit "Ghetto Dinner", a Remix for Georgi Barrel released on Sinnmusik. Schmeissers Version has been played by names like Laurent Garnier, Carl Craig or John Digweed.

Using the success of his album "Swinger" as a door opener in America, Mano Meter has also grooved straight into the hearts of Artist's like Parov Stelar, Paul Kalkbrenners wife Simina Grigoriu or Alle Farben.

The tracks they are creating are inspired by this very special place. Produced with the vibes they caught up in the club, they always have the final rehearsal back there. They pack up all it's special athmosphere, the creative team and of course the guests. Meanwhile you'll find both of them playing as residents here.

At the beginning of the year eminent electro DJ Mano Meter and mechanical grooves drummer Nook joined forces to create MANOOK. With a bit of cheek and some playful electro swing they've set out to give the party scene what it's been waiting for. A bold statement -but not unfounded.

Mano is a DJ and musician in his own right who plays piano, trumpet and guitar; when MANOOK's catchy tunes go live he won't be shy to give his trumpet a whirl. Mano Meter's last solo album "Swinger" infiltrated various party scenes and quickly sealed his popularity abroad. Before he knew it he was playing in Canada and the USA.

Nook has provided the beat for a variety of different bands over the years. From a drummer's perspective he's become quite the electro expert. Today Nook drums live for dark-electro institution PROJECT PITCHFORK and in the past has lent his support to German-American industrial legends DIE KRUPPS.

MANOOK's plans for the future include inviting guest performers along to play live as an added element of surprise to further fuel the great atmosphere of the gig.